Larissa's language learning journey takes her from Brazil to the United States, then from Germany to Sweden. Discover the lessons she has learned about learning languages, and what it's like growing up as a half-Italian, half-Japanese girl in Brazil. 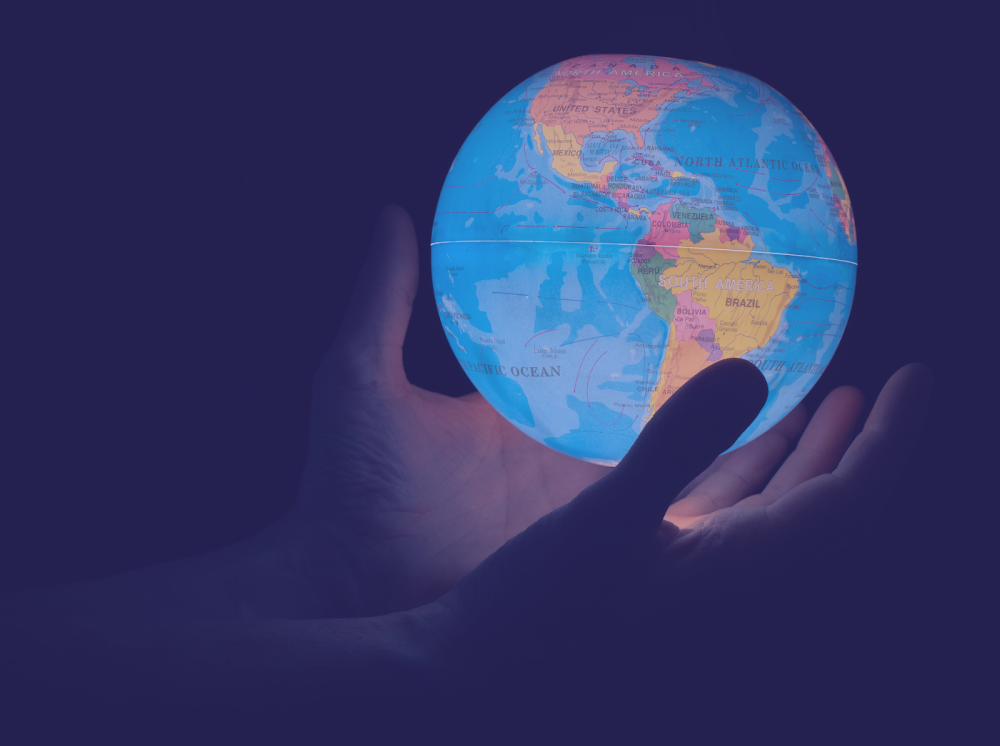 1 nationality, 7 countries and 8 languages: Portuguese, English, Spanish, Italian, Japanese, French, German and Swedish. 4 of those languages currently in use, 4 close to forgotten. This is the story of a Brazilian girl who loves traveling, exploring the world and dares to learn new languages.

If you don’t like long blog posts, this is likely not for you. If you are impatient, although I do not recommend it, you might want to jump directly into the “take home messages” at the end;  it’s a summary of the learnings across the years. But if you dare to stay with me, believe me, this unusual story will take you traveling half of the planet just by following my footsteps.

All stories have a beginning. And mine starts as a child who has been exposed to foreign languages at an early age. As a half Japanese, half Italian, born in Brazil, I guess that’s not difficult to imagine. I know this often sounds like an exotic combination, but the truth is that it is actually quite common in Brazil.

Brazil is a huge mix of nationalities, likely the biggest genetic pool in the world. From our historical colonisation by the Portuguese (and the importing of slaves from Africa), blending with the local native Indians, to the later immigration of Europeans and Asians after the 1st and the 2nd world war, Brazil is a big mix of everything. That reflects in our history, traditions, culture, and also identity.

That’s also how it all began for me. Born in a culturally mixed family, I was very early exposed to different languages at home. Not right away with my parents, as most of you might think. It did start with Japanese and Italian, of course. But those languages were spoken mainly with my grandparents, in our frequent weekend visits.

At home, Portuguese (the official language of Brazil) has always been predominant. For practical reasons, and I will explain why. That was simply the language both my parents could speak, and it was simply easier to raise a child in a language that was common for both. There were no “secret” communication channels between distinct parents and, therefore, also no chance to get ice cream by “secretly” asking dad because mom doesn’t get it.

Later on, when I started school, I got introduced to French at 1st grade. Yeah, I know, that is probably the most awkward chapter of my life… “Why French?” is probably the question I still ask myself until now. Brazilian schools often offer a foreign language in their regular programme. But definitely Italian or Japanese would have made a lot more sense, I still try to explain to my parents… From singing the French national anthem (before the Brazilian one) every Monday first thing at school, this is how we went on with French for the rest 10 school years.

We got started with English at school in 5th grade and not only that was quite “late” considering most standard school programs, it was also not the best quality. I got sent to a private English school on the side, so that I could take extra classes after regular school hours. I should probably point out that this is quite a common decision for parents that can afford to do so in Brazil. It exposed me much more intensively to the language, especially on grammar and reading. But even though I had been studying English for several years, I never felt confident enough to speak, and would never dare to hold a conversation in English.

I knew I needed to get more fluency in English and I was certain that the best way to do so was by throwing myself inside a native speaking community. The idea to do a language exchange program had crossed my mind, but I always thought they were too expensive, so I never dared to ask my parents. My solution to this problem was to find myself an internship, to both justify my trip in a more career-oriented perspective, as well as a way to have a full immersion in the new culture. That’s how I ended up in the USA, my first time living abroad. And not just anywhere in the USA, actually in a whale watching boat in the USA.

Yes, you got that right. A whale watching boat. I should probably have mentioned that whales are my favorite animals in the world. And the idea of jumping on a boat and following them across the ocean, at the same time of learning English, made me VERY excited. This opportunity not only gave me the fluency I needed, but was also a dream job and an incredible chance to experience life abroad, get to know the local culture, meet and hang out with locals. I went to the USA being able to communicate with somewhat broken English. I came back fluent. This experience was eye-opening for me, and also the conviction that immersion is key to any language learning process.

Life in the water continued after the USA. This experience of following giant whales and dolphins across oceans, enjoying sunsets on a boat and feeling the sea breeze were so easy to fall in love with. Since then, I’ve been volunteering during my free time also in Chile and Spain. I have had the opportunity to encounter different cetacean species, research in different groups and practice Spanish on the way. Who would have hoped for a better life, right?!

By now you might be wondering if I make a living with whales. I wish! I’m actually a cancer researcher, and have been working in this field pretty much my whole life. Understanding and treating cancer is my passion, and it drives a lot of my motivations both personally and professionally. It was my work on cancer that took me to Germany, on a PhD project using nanomedicines to treat cancer metastases. What was meant to be a 4-year project turned out actually to be the best 6 years of my life. A full immersion in culture, language, traditions. Germany gave me great work-life balance, fantastic management, an exponentially growing career, life happiness, satisfaction and also life-time friends.

Now I’m sure you are wondering why I left this great life in Germany, right? Trust me, I sometimes wonder that myself. Well, it was “cancer” again that took me places. I ended up in Sweden for work, first in a university hospital and I currently work at a large pharmaceutical company. I should probably start by saying that if you know German, learning Swedish is just one more step forward. Both languages are quite similar (same Germanic roots), so one can make a lot of associations and infer the meaning based on context. Though I am still working on my Swedish, after 2.5 years, I feel confident to communicate and solve most of the everyday things, which is the turning point to just throw yourself out there.

Now I’ve taken you half way through the world (Brazil - USA - Chile - Japan - Germany - Spain - Sweden), so thanks for bearing with me throughout my journey. I guess you might want some closings about my worldwide learning experience and some impressions on what went right or wrong.

Here’s a few reflections based on these many years learning languages, in different contexts and several countries:

The earlier you learn, the easier it is. Your brain is more flexible, adaptable to sounds, capable of processing and reproducing the things you hear. If you have the chance to practice at home (in case of parents that speak different languages), I encourage you to do it. Your kids might not like you in the beginning, but they will be grateful for it in the future.

Practice is the key to master any learning process. Regardless of what you do, you can only get good at it by doing it a million times. Mistakes will happen, no doubt. It doesn’t have to be perfect, you just need to get the message across. What in the end differentiate the people that succeed in learning a language from the ones that don’t is the ability to overcome the barriers, challenges, shyness, and just put yourself out there.

Take home message #3: What you don’t use, you forget.

Like anything in life, what you don’t do repeatedly, you forget. Languages aren’t any different. I couldn’t reinforce enough how important this is, also based on my own experience. The languages I’ve learnt but that are not in constant practice, go forgotten. Or are kept somewhere in a backup storage place in the brain that is difficult to restore. Make sure you use every opportunity to keep up with it, whether it is through books, movies, messaging friends, etc. Doing something - even if small - is better than doing nothing.

This is the reverse of message #1, I know. But it’s on purpose meant to be so. Even though I do advocate for early language learning, and think this has several benefits, I still think one is never too old to learn to get started. I admit that it has been harder for me to learn languages as an adult (eg. German, Swedish) in comparison to as a child (eg. French, English). It takes more effort, more persistence, more patience. It is hard to juggle language learning with the activities of a “regular adult life” (family, job, dinner, laundry). But the rewarding feeling is also proportional to the amount of effort you put into it. And trust me, the empowerment feeling you get yourself around in the local language without depending on anyone is something no one can put a value on.

Feeling inspired by my story? Or maybe you also have an interesting or unusual story about your own language learning experience?

I would love to hear it, and I’m sure others would too! You can email hi@leonardoenglish.com… and share your story! I bet our members will feel inspired.

And in case some of you are curious, here’s how I feel about these languages I’ve learnt:

Most pleasant: Spanish and French 🇪🇸🇫🇷

Most enthusiastic: Portuguese and Italian 🇵🇹🇮🇹

Most expressive: Italian and English 🇮🇹🇬🇧

Most rewarding: Japanese and German 🇯🇵🇩🇪

Most critical: Swedish and French 🇸🇪🇫🇷

Larissa's language learning journey is certainly inspiring, and it's great to hear her story. If you were wondering, yes, our episode on The Amazing Life of Whales was her request.