Blog
/
Language learning
/
What is Shadowing And Why Should You Use It To Improve Your English Speaking Skills?

What is Shadowing And Why Should You Use It To Improve Your English Speaking Skills?

Speaking English is hard, and it can be difficult to practice. Check out this groundbreaking technique for improving your English speaking. You can do it on your own with just 15 minutes a day. 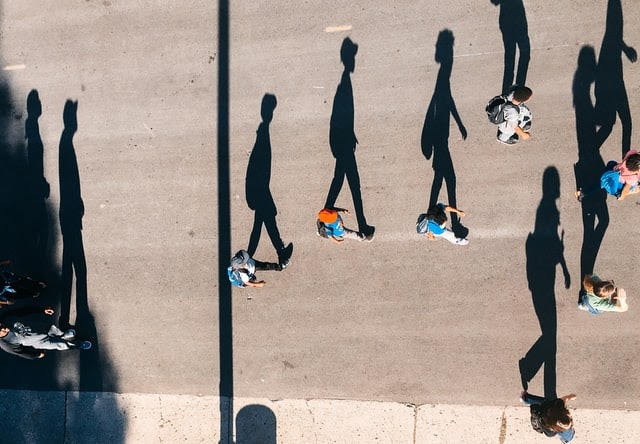 Lots of our members choose to learn with Leonardo English because they want to be able to have natural conversations with native English speakers.

The shadowing technique is another great way to improve your listening and speaking skills—but lots of people don’t know about it. It’s almost like a secret strategy, kept hidden from the world by the most effective polyglots (okay… maybe not really though).

What’s so great about it is that

Shadowing is an amazing complement to the English Learning for Curious Minds podcast. If you already listen, shadowing can be an easy and useful way to get even more out of it.

If you’re curious about what shadowing is and how you can use it to improve your English speaking skills, this guide is for you.

Shadowing is a language learning technique where you repeat an audio just after you hear it. You’re acting like an “echo” or a “shadow” (hence the name “shadowing). You listen to the words and then say them back out loud. It looks like this:

Remember that you’re not listening to the audio, stopping it, and then repeating it. You’re repeating it as you’re listening.

Shadowing was popularised by Alexander Arguelles, who is something of a “hyperglot”. (By the way, if you’re interested in how a “hyperglot” practices a foreign language, check out his “language workout”, which he apparently does for 9 hours a day.)

How do I use shadowing to improve my English speaking skills?

So how do you actually do it? Here’s a simple guide.

If you’re interested in following Alexander Arguelles, he suggests that you do your shadowing while you’re walking outside. Ideally you would:

Walking quickly outside might seem strange, but the idea is to keep the oxygen flowing to your brain, making you more alert, and increasing your brain functionality.

You don’t need to walk around outside, but Alexander Arguelles has used this method to learn 50 different languages, so I’d definitely take his word for it.

Here are some further tips for shadowing:

While it’s best to focus on this activity, you can also do this while you’re doing other things. For example, you can do it in the car on your commute to work, while you’re out jogging, or even while you’re having a bath.

How does shadowing help?

Shadowing helps you develop all the physical aspects of fluency. These include things like pronunciation, prosody, and rhythm of English.

Pronunciation is how a word is articulated. It involves things like how open your mouth is, the placement of your tongue, and so on.

Shadowing is really great for helping you practice developing muscle memory for your mouth so you can better pronounce English words.

Prosody is like the “music” of a language. It’s how the pitches vary across a sentence or across a conversation. For example, in American English we often raise our pitch at the end of a sentence to signal a question. That’s an example of prosody.

Each language and accent have different ways that they do Prosody, which is why, for example, sometimes people say that the Irish sound like they’re singing when they’re speaking.

Prosody and intonation are often neglected in teaching English. That’s partly because it’s a bit difficult to teach, but it’s also partly because English teachers tend to put more value on learning isolated words and sentences.

Shadowing is an excellent way to practice the prosody of English because you mimic not just the words, but also the pitches. In this way you practice speaking similar to how native English-speakers speak.

If you're curious about what kind of accent you should be listening to (and whether it really matters), I'd recommend reading our guide on American vs. British vs. Australian accents in English.

Rhythm refers to the pacing and stress of a language. It is a product of stressing some words and not stressing others.

While mastering the rhythm for now native English speakers' talk is not essential for being understood, it can help you sound much more natural or fluent when you’re speaking. Like prosody, rhythm tends to be undervalued when teaching English and learners who have a mother tongue that are phonemic or syllable-timed have particular difficulties with this in English.

Again, shadowing helps teach English because you get to practice it together with audio from a native speaker. You get a sense of which words are stressed and which are not by actually stressing them or not.

Is the shadowing technique effective?

Yes, shadowing is great for developing speaking fluency in English, especially the physical aspects of fluency like pronunciation, prosody, and rhythm.

Several studies have shown that it can be an effective way to improve speaking skills. For example, in one experiment at the National Taiwan University, researchers found that including a shadowing technique significantly improved students intonation, fluency, word pronunciation, and overall pronunciation.

According to researchers, shadowing is effective for

What if I feel strange doing it?

Ya, it does seem a little weird, doesn’t it? Especially if you follow the advice of Alexander Arguelles and do it outside. Shadowing may feel strange and unnatural if you’re not used to it. This can stop some people from trying it.

But, rather than think about it as a strange activity, think about it like a language superpower. Polyglots and successful language learners swear by this method. And it’s accessible to anyone that has access to English audio.

Give it a try even if it feels a bit weird at the beginning. Give yourself a challenge, like doing it for 15 minutes a day for 30 days. You’ll definitely notice a difference in your speaking fluency.

And remind yourself it’s not that weird. If you do it outside with your headphones, people might just think you’re talking to someone on the phone. And if you still feel weird, just do it at home in the bedroom. I won’t tell.

Make shadowing a part of your English learning plan

Shadowing is a super useful exercise and can be used to improve your speaking skills.

Research has shown that it can be an effective activity in a variety of teaching and learning environments. Best of all, it’s a great way to improve your English speaking when you don’t have anyone to practise with.

So why not add it to your English learning plan?

You’ll find it especially useful if you struggle with pronunciation, prosody, rhythm, or if you simply want to speak English more naturally.

And if you need some inspiration, you can check out a member of Leonardo English, Kristian, shadowing the English Learning for Curious Minds podcast as he talks about why he became a member.